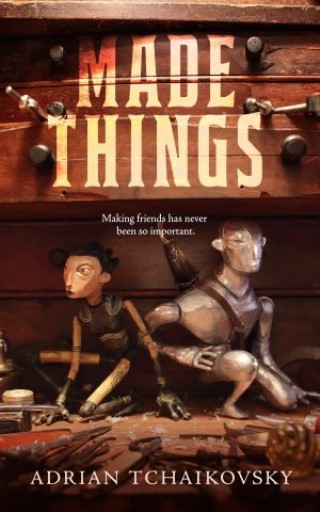 Award-winning author Adrian Tchaikovsky's Made Things is dark fantasy tale of how the most unlikely characters may become the most heroic.

Making friends has never been so important.

Welcome to Fountains Parish--a cesspit of trade and crime, where ambition curls up to die and desperation grows on its cobbled streets like mold on week-old bread.

Coppelia is a street thief, a trickster, a low-level con artist. But she has something other thieves don't... tiny puppet-like companions: some made of wood, some of metal. They don't entirely trust her, and she doesn't entirely understand them, but their partnership mostly works.

After a surprising discovery shakes their world to the core, Coppelia and her friends must re-examine everything they thought they knew about their world, while attempting to save their city from a seemingly impossible new threat.

At the Publisher's request, this title is being sold without Digital Rights Management Software (DRM) applied.

Adrian Tchaikovsky: ADRIAN TCHAIKOVSKY is the author of the acclaimed Shadows of the Apt fantasy series and the epic science fiction blockbuster Children of Time. He has won the Arthur C. Clarke Award, a British Fantasy Society Award, and been nominated for the David Gemmell Legend Award. In civilian life he is a gamer and amateur entomologist.