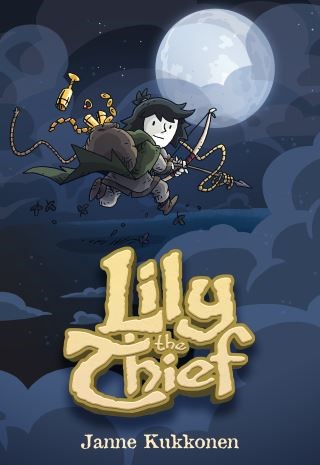 In Janne Kukkonen's swashbuckling fantasy graphic novel Lily the Thief, a young girl tries to make a name for herself in a secret and perilous society of thieves.

Lily is a young novice who dreams of being a master thief. That’s not easy when the Guildmaster of Thieves only assigns you the lowliest jobs: pick-pocketing, trespassing, and petty theft. But on one of these meager quests, Lily unearths a plot involving a mysterious cult and long-forgotten gods—a secret that could destroy the whole world.

Lily must fight to save the same people who have branded her an outcast. Can she use her cunning to put an ancient evil to rest?

Janne Kukkonen: Janne Kukkonen was born in 1983 in Rovaniemi, Finland. He spent his childhood reading and drawing comics, never considering doing anything else when he grew up. He studied animation at the Lybecker Institute in Raahe and has worked on various music videos, commercials, and animated shorts while writing his own scripts and stories during his free time. In 2014 he took a break from animation to create his first graphic novel, Lily the Thief. He now writes and illustrates his own comics full-time, and he still wouldn’t consider doing anything else when he grows up.