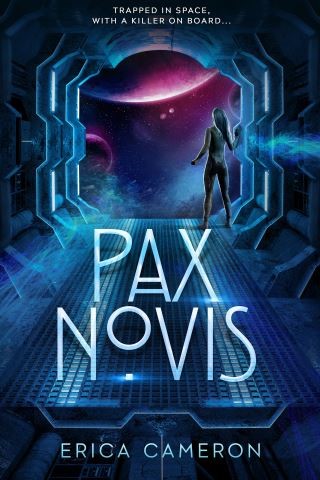 Cira Antares is deeply loyal to two things: Pax Novis—the cargo ship captained by her mother that transports supplies across war-torn star systems—and her personal mission to save war orphans. But hiding them as stowaways on the ship is illegal, and if any of them were found, not even her mother could protect Cira from the consequences.

She has successfully kept her secret…until supplies start to go missing. Food. Clothing. Tools. All signs point to her stowaways, but they wouldn’t do anything to risk exposing themselves—or her. Especially not Riston, the oldest of the group and someone Cira has grown close to. Someone she might even be falling in love with...

And petty thefts are only the beginning—whole ships are disappearing now.

Not caught in a firefight. Not destroyed by another planet. Vanishing. Without a trace.

And Pax Novis is next.

Erica Cameron: ERICA CAMERON is a young adult author of over ten novels. Saying she writes a lot is a grand understatement. Her debut novel, Sing Sweet Nightingale, won the Marlene Award from the Washington Romance Writers. Island of Exiles, a Kirkus starred review recipient, was a Junior Library Guild selection, as was the sequel, Sea of Strangers. Erica lives in Fort Lauderdale, Florida, where she spends her days working with teens and nights writing for them.