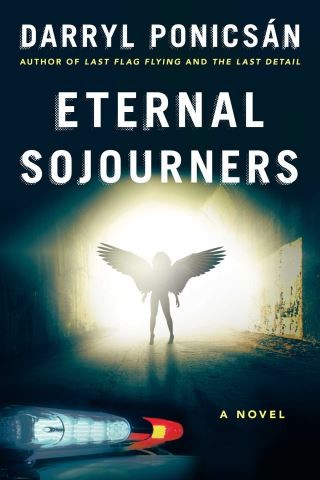 From the author of The Last Detail and Last Flag Flying, a surreal comic novel in the tradition of Joseph Heller about movies, small-town politics, and a place between heaven and hell.

Following a rewrite job in New York City, veteran screenwriter D. K. Kecskeméti finds himself not in his home in Hollywood Hills but in an unfamiliar house in a strange town, where he's greeted by an obsequious houseman who informs that his wife, Hope, is gone. The note she left reveals that she’s on a retreat to deal with a personal crisis of which DK was somehow unaware.

Confused and disoriented, unable to sleep, he wanders the deserted streets. He comes upon three cops, guns drawn, at the open doorway of a residence. When the doorway fills with a blinding light, they open fire. The victim falls right next to DK. She is a beautiful black woman, who happens to be naked . . . and an angel. She folds her wings as she utters her last words: “Hope is alive.”

In the days that follow, as he seeks answers about the shooting and a way to rejoin his wife, DK learns more about his new hometown and meets its residents, who try to convince him—through the roar of leaf blowers—that he's lucky to be in this little slice of heaven. But what can a screenwriter do when "a little slice of heaven" is closer to a small corner of hell?

Darryl Ponicsán: Darryl Ponicsán is the author of thirteen novels and is an award-winning screenwriter for both film and television. Born in Shenandoah, Pennsylvania, he taught high school after attending Muhlenberg College and earning an MA at Cornell University. He served in the US Navy from 1962 to 1965, then did social work in the Watts area of Los Angeles and taught high school before the success of his debut novel, The Last Detail, allowed him to become a full-time writer. He resides in Palm Springs and Sonoma, California.