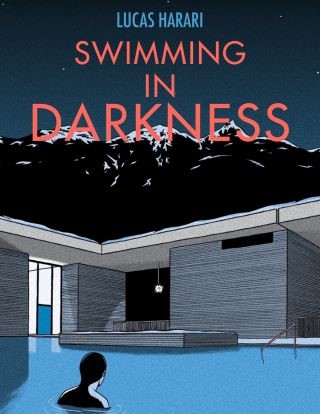 • Swimming in Darkness is the latest French (from France)-to-English graphic novel from Arsenal. Past titles have included the critical and commercial hits Blue Is the Warmest Color, Such a Lovely Little War, and Saigon Calling.
• We were first attracted to this novel because of the stunning artwork, which uses a palette of three pantone (as opposed to CMYK) colors and their related tints: red, blue, and black. The art also has a stylish minimalism to it; Pierre, the protagonist, is drawn simply, with little to no facial expressions, which makes the explosive and colorful happenings all around him all that more vivid.
• The novel is a gripping, noir-ish mystery in which the young man Pierre, who has dropped out of architecture school, is drawn to a thermal springs complex somewhere deep within the Swiss Alps. (The complex, designed by well-known architect Paul Zumthor, actually exists.) There, he comes to learn about its larger-than-life powers – stones imbued with magic; a mountain that’s been said to swallow up people – while at the same time is pursued by the villain Valeret, who has also been trying to learn the secrets of the springs.
• The original book, published under the title L’Aimant (The Magnet) by the esteemed French graphic novel publisher Sarbacane, has sold over 30,000 copies in France. It has also been published in German, Italian, Dutch, Chinese, and Romansh (a local Swiss language).
• Lucas Harari is a youngish (28 years old) illustrator from Paris who got his start creating zines. This is his first graphic novel. His minimalist yet vivid, altered-reality style is influenced by such esteemed graphic novelists as Charles Burns (Black Hole), Daniel Clewes (Ghost World), and Chris Ware (Monograph).
• A digital blad will be available and shared with CBSD reps. Physical copies will be mailed to reps.
• Publicity by Beth Parker, who has handled many of our graphic titles.